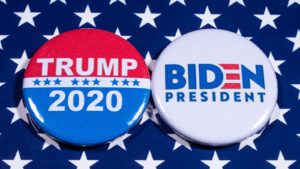 It’s Election Day 2020. Naturally, the question on the top of everyone’s mind is: Who is going to win? President Donald Trump, or former Vice President Joe Biden? But, as investors, we are asking a slightly different question: Who is going to be better for the stock market? Trump or Biden?

Interestingly enough, as I write this, stocks are having a blockbuster day. All the major indices — the Dow Jones, S&P 500 and Nasdaq — are up about 2%. Biden has been favored in the polls. One could connect those dots, and say that Wall Street is bullish on a Biden victory.

But is that so? Will Biden actually be better for the stock market? After all, aren’t Trump’s policies more business friendly?

Let’s answer all those questions right now, so that you’re prepared to invest once a winner is announced.

History Says Democrats Are Better for the Market

Let’s start this discussion by asking a simple question: over the past 70 years, who has been better for the economy and the market? Democratic presidents? Or Republican presidents?

While I understand that this question is oversimplified — each candidate is different, party lines change over time and how much a president accomplishes in office strongly depends on who controls the House and Senate — the answer still does give us good context for judging whether Biden or Trump will be better for the market.

So which party has historically been better for the market and the economy?

Democrats. By a significant margin.

The Incumbent Advantage Is Real, Too

For starters, Republican victories tend to lead to more significant near-term outperformance in the markets. That is, in the few months after the election — November to February — the S&P 500 has historically rallied more following a Republican victory than a Democratic victory (although that same analysis does show that Democratic victories lead to better performance in a 12 month window).

How About Those Higher Taxes?

One of the big talking points with respect to these two presidents and economic/market performance is taxes.

As go earnings, so go stocks. Therefore, the simple analysis here is that Trump is better for the stock market because his platform will lead to higher corporate earnings.

But we have to contextualize that with two important notes:

So, when it comes to the taxes argument, it feels like a wash between Trump and Biden. If Biden does actually get around to raising taxes, a Trump presidency will likely end up being better for the market. But if Biden doesn’t get around to it — which he may not — then a Biden president will end up being better because you’ll have the same earnings power with a higher earnings multiple.

Who Is Better for the Stock Market?

To be frank, I think it’s six of one and half a dozen of the other.

With Trump, you’ll get lower taxes, higher earnings and more business-friendly policies. But you will also get less stimulus and continued escalating geopolitical tensions.

With Biden, you’ll get higher taxes, lower earnings and less business-friendly policies. But you will also get more stimulus and de-escalation of geopolitical tensions.

It really is six of one, half a dozen of the other.

Why Is the Market Rallying?

The stock market is rallying big on Election Day because Wall Street increasingly believes that the election results will be definitive, and we will get a clear winner.

The market hates uncertainty. So, the worst outcome of this election would be a narrow victory, followed by the losing party contesting the election, which would be followed by recounts and court cases that would drag on for weeks — leaving the American people (and the stock market) hanging in suspense.

The market also believes that in the event of a narrow victory, Trump will contest the results, while Biden won’t.

Therefore — because the market likes Trump’s lower taxes but also likes Biden’s stimulus plans — there are two ideal outcomes for the market: Either a narrow Trump victory, or a landslide Biden victory.

Investors are voting with their wallets on Election Day, and saying that the two outcomes which the market would be fine with, are the two most likely outcomes. If we get either, I’m sure the stock market will be just fine in the coming weeks and months.

But if it’s a narrow Biden victory followed by Trump contesting the results — well, that’s a recipe for a stock market sell-off in November.

On the date of publication, Luke Lango did not have (either directly or indirectly) any positions in the securities mentioned in this article.

The New Daily 10X Stock Report: 98.7% Accuracy – Gains Up to 466.78%. InvestorPlace’s brand-new and highly controversial newsletter… is rocking the industry… delivering one breakthrough stock recommendation each and every trading day… delivered straight to your inbox. 98.7% Accuracy to Date – Gains Up to 466.78%. Now for a limited time… you can get in for just $19. Click here to find out how.

On the date of publication, Luke Lango did not have (either directly or indirectly) any positions in the securities mentioned in this article.

The New Daily 10X Stock Report: 98.7% Accuracy – Gains Up to 466.78%. InvestorPlace’s brand-new and highly controversial newsletter… is rocking the industry… delivering one breakthrough stock recommendation each and every trading day… delivered straight to your inbox. 98.7% Accuracy to Date – Gains Up to 466.78%. Now for a limited time… you can get in for just $19. Click here to find out how.

The first bitcoin futures ETF in the U.S. is set to begin trading next week
Stocks making the biggest moves after hours: Snap, Intel, Chipotle and more
Fixed-income titan Pimco is starting to embrace cryptocurrencies, CIO says
7 Top Stock Picks From Israel ‘Izzy’ Englander for Your Portfolio
SEC says brokers enticed by payment for order flow are making trading into a game to lure investors